The Little NB2 Miata That Could – Part 2: Chassis & Drivetrain

In our last installment, we outlined the Mazda 1.8ltr BP-VE engine we built for Jacey’s NB2 Miata race car.  With the engine blueprinted and assembled, it was time for installation in the chassis.

Of course, project cars never stop with just one new toy.  What fun would that be, right?  In the vein of being more competitive and more reliable, it was time to acquire some more goodies and install them along with the new engine.

Jacey’s car originally came with a 5 speed which, I’m told, is made of glass.  With the engine spitting out considerably more power, it made sense to prevent a problem before it happened with the transmission.  The 6 speed that was available in some of the NB models was a logical choice.  The Mazdaspeed Miata was where we looked for this particular 6 speed transmission.  When a manufacturer does all the hard work for you, you smile and go with it.  Why try to re-invent the wheel when you have the option of a drop in replacement.

In an amusing twist of fate, we discovered that the NB Miata 6 speed was suspiciously similar to a Nissan transmission we are very familiar with. Luckily, we recognized the transmission right away. 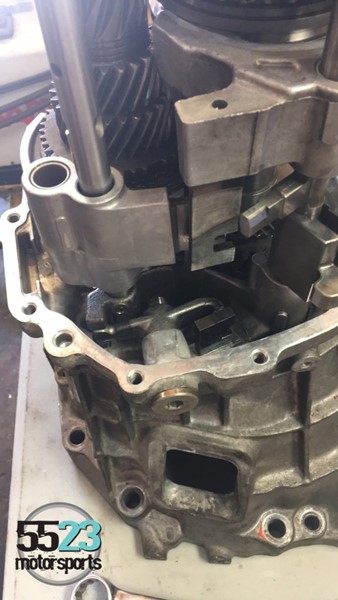 Why was this recognition so lucky? Someone, who will remain nameless, to protect his street cred, accidentally pulled the A striker shift lever pivot pin out of the transmission while trying to help. That meant we, unexpectedly, had to disassemble, repair, and then reassemble the transmission. Jacey got his new (used) transmission refreshed before it ever went in the car. This was not the original plan but, it probably worked out for the better. 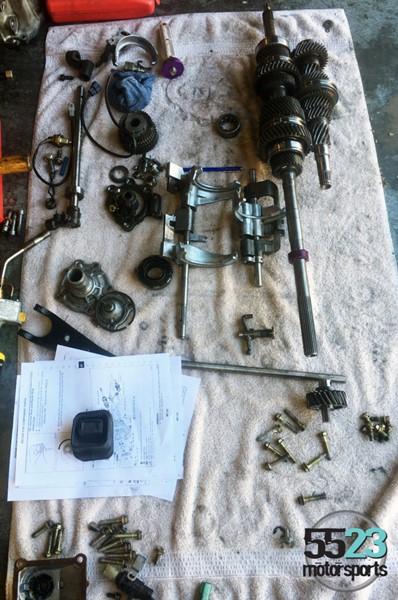 With the engine and transmission all shiny, new, and stronger than ever, it was time to get it all bolted together and ready for install.  To go with the newly rebuilt transmission, we got a Spec 6 pad clutch and a Fidanza lightweight aluminum flywheel. 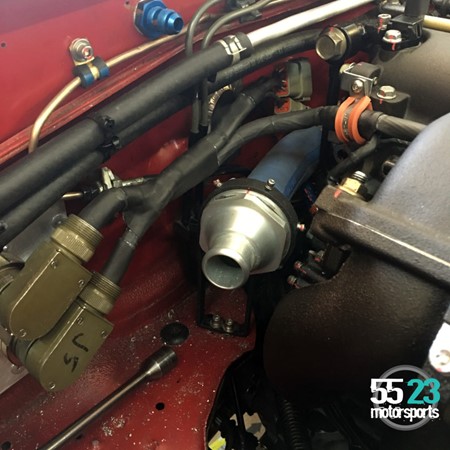 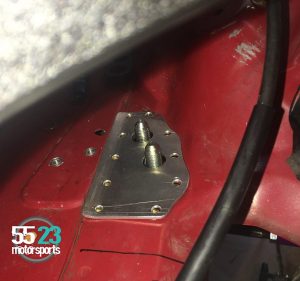 The Kraftwerks based Rotrex supercharger setup was going to remain the same as it was on the stock engine, until we get a good feel for where we were at with the car. The Rotrex C30-74 that the car arrived with, was putting down a pretty respectable power number for a completely stock engine and an existing tune. Plans to upgrade the Rotrex supercharger in the future are in the works. 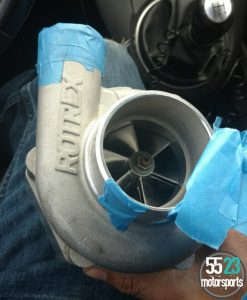 Once the engine was installed we finished up any oil, coolant supply lines we were custom making for the Miata.  We make new hard lines where we can, and custom soft lines where we couldn’t use a hard line.  This allows for a cleaner appearance, more reliability and the hard lines don’t suffer from expansion, and deterioration under racing conditions like a rubber hose would. 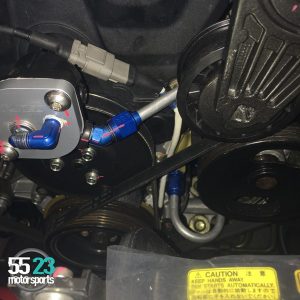 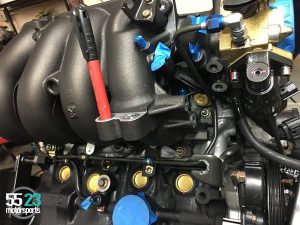 In addition to any custom supply lines to the engine, we also installed a new Earl’s Oil Cooler and relocated the oil filter. This new oil cooler should help keep engine temps down while pushing the car hard on the track. 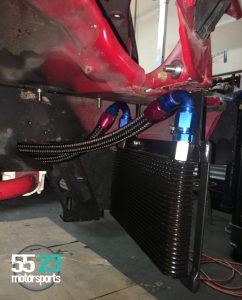 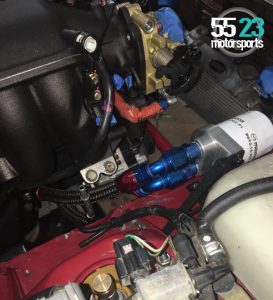 Once you have had a heat related failure, it’s almost certain you’ll never have another one. We have been doing this long enough to know that heat is bad, fire is bad, and it’s best to just prevent it before it’s a problem. To be sure we did not have any heat issues in the engine bay we custom made heat shields to protect any potential failure points. 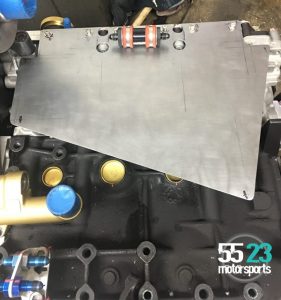 We also used Earl’s fire sleeve on any hoses, plumbing, wiring that is routed near a heat source.  We use this fire sleeve frequently.  It offers a relatively inexpensive bit of insurance for our customers.  A car fire will ruin anyone’s week.  It only makes sense to do everything you can to protect your investment. 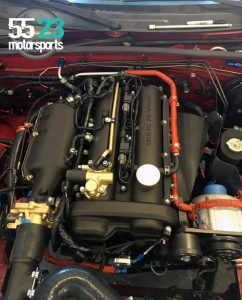 Now that the engine was happily situated in it’s new home, and everything was plumbed, it was time to install all of the new suspension and brake pieces Jacey brought us.  Jacey brought is some custom Feal coilovers with swift springs, Keisler Automation Drop spindles front and rear, and we got him a FastBrakes 6 Piston Wilwood Front Big Brake Kit.  In the time it took us to build the engine, he decided to get some 15×10 6UL wheels to give himself a significantly larger contact patch than his old Enkei wheels. The addition of the new, wider wheels will ensure better grip and handling. 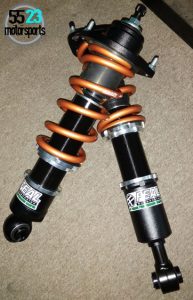 When we got it, the car had the R-package Miata front tie rods, Bauer Extended front lower ball joints, Racing Beat hollow front sway bar with 949 racing adjustable end links, Energy Suspension Poly bushings, ARP wheel studs, stainless steel braided brake lines, and an Autoexe/Mazdaspeed 3 point shock tower brace.  All of these were replaced on the car when the new engine was installed. 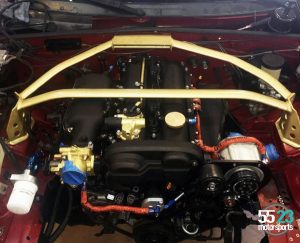 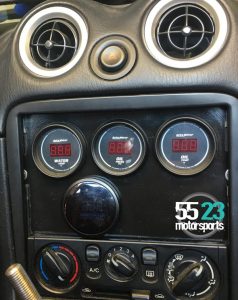 In addition to all these modifications, we discovered that the existing wiring harness / tune was not as functional as Jacey was led to believe. In our next installment we will discuss the wiring, tuning and new data logging parts. Stay tuned.

Modified oil #5 galley and oil pump for a small bl

Engine complete, and getting crated up, to go to i

Fancy timing pointer with custom spacer for the sm

When your AC hoses don’t fit, because you modifi