It’s been a long time coming and we have been eagerly anticipating it, but now it’s here.  AEM Electronics has introduced a plug and play version of the Infinity ECU with a full wire harness to support engine swaps or to make switching to an Infinity ECU on a Chevy LS V8 powered car a piece of cake.

The Chevy LS family of V8 engines is fast becoming the new equivalent of what the Honda B series was for engine swaps.  With its compact cylinder heads, due to overhead valves and a 90 degree V angle, the LS is both lightweight and compact and able to put a lot of displacement into a small package. At about 440 lbs fully dressed with all accessories for the aluminum block versions, it is lighter than many turbocharged 4 cylinders.

On pump gas, the LS can offer increased power in a low stress package compared to a high strung turbo engine with comparable or less weight.  Its compact exterior dimensions and low overall height are also a plus in getting it to fit into many different chassis with minimal fuss. For instance, in a Nissan S Chassis the LS fits like it was made to go in there and more than a few companies have motor mounts, headers and oil pans to make the swap a drop-in procedure.  An LS swapped 240SX is a formidable car. With suspension, brake mods and sticky tires, it can perform right up there with modern expensive super cars.

We set out to evaluate AEM’s new plug and play engine management solution with the help of our friend Matt Powers. Matt used to be one of the stars of Formula D, but he now mostly competes overseas and does drift demos for his sponsors stateside.  Matt’s demo car is powered by a Chevrolet Performance LS3 crate motor.  The Demo car is actually the infamous Pirate Ship, Matt’s original competition car that he basically grew up with and initially competed as a pro in.  Remember the green hella flush poster boy car?  Well this was it!

In prepping his car for the grueling all day drift demo at Nitto’s Auto Enthusiast Day, Matt had swapped his intake manifold for a FAST LSX and added a mild hydralic roller Comp Cam. Matt was figuring that this would be good for around 40 more WHP over stock. Since he was greatly changing the engine’s flow characteristics, now was a good time for a stand alone ECU and Matt chose the AEM Infinity. 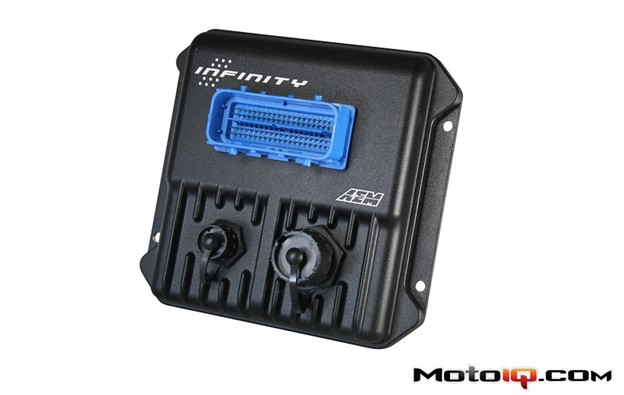 Matt selected the AEM Infinity 8H for his car.  The heart of the Infinity is a 200MHz processor that can process at 400 MIPS.  It can log 64 GB of data at 1 KHz.  The Infinity also has a sealed water and shock resistant enclosure and com ports. This can allow it to be mounted in the engine compartment if desired. The Infinity is multi map capable and has the capacity for tons of data logging. The Infinity ECU is very cost effective and saves both parts and labor costs with its plug and play harness. 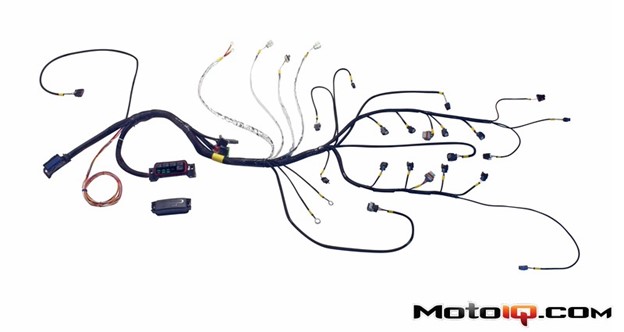 The coolest thing about this system is the harness.  The harness is completely plug and play and clicks directly into the stock GM sensors.  Although it’s not MIL-Spec, the AEM harness is OEM quality with quality terminations and wire, and shielded wire being used where appropriate.  It is also wrapped with an abrasion resistant sheath and has appropriate strain relief. Unlike other GM plug and play EZ wire harnesses the AEM harness has generous protection for its power distribution side with 5 fuses and 7 relays. 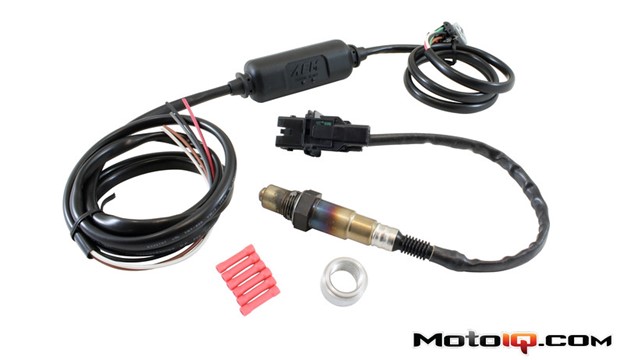 The AEM harness has provisions for AEM’s latest fast sampling wideband AFR sensor with no need for extension cables. Here we have the additional on board controller and wideband kit Matt added to the his set-up. The Infinity already has a built in controller for one wideband, but Matt wanted the additional sensor in order to get feedback control for both banks of cylinders. 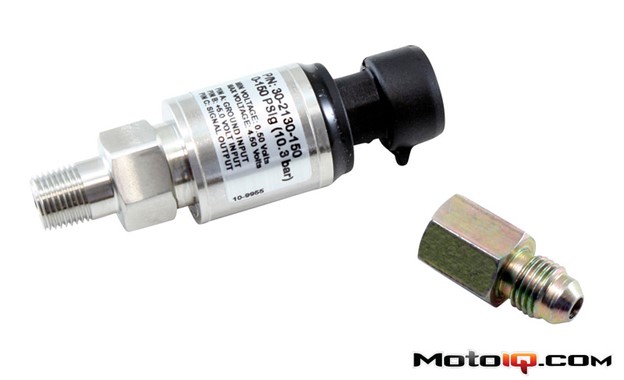 Matt’s system included monitoring of the oil pressure and fuel pressure to set up engine safeguards via the Infinity system.  If fuel pressure, oil pressure or engine temperatures go beyond pre programmed parameters the ECU will put the engine in a protected mode where full power operation is not possible to both get the driver’s attention and greatly reduce the chances of engine damage. 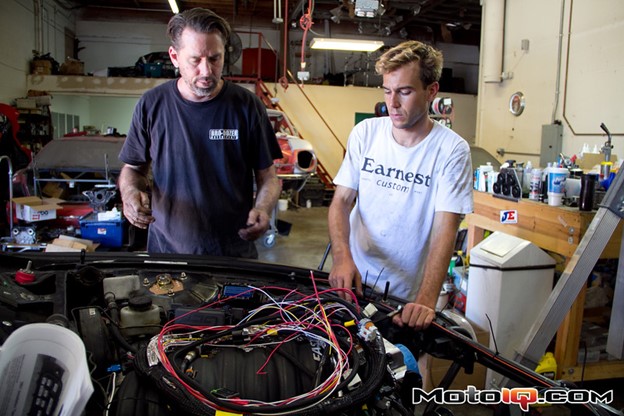 Matt’s S14 already had a Chevrolet Performance LS3 crate motor installed with the OEM ECU and electronics.  The LS3 was installed using Hooker’s 240SX Specific Headers and Mount Kit with stainless headers. Working at 5523 Motorsports, Matt and his crew chief Big Tom first laid out the AEM harness to get a rough idea of how to position everything. 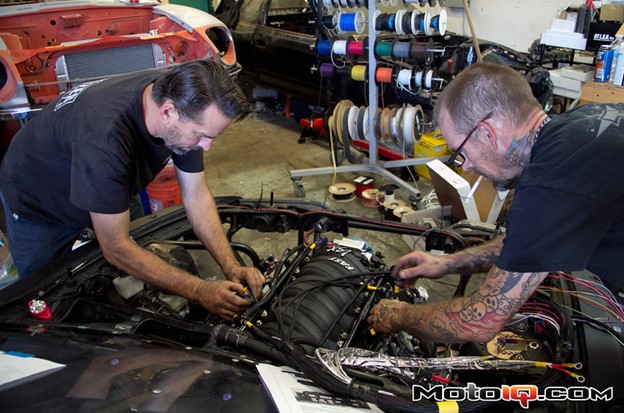 Big Tom and 5523’s resident guru Zombie Vampire Nick Hunter get down to business putting the AEM wire harness in place and hooking it all up to the LS3’s sensors. 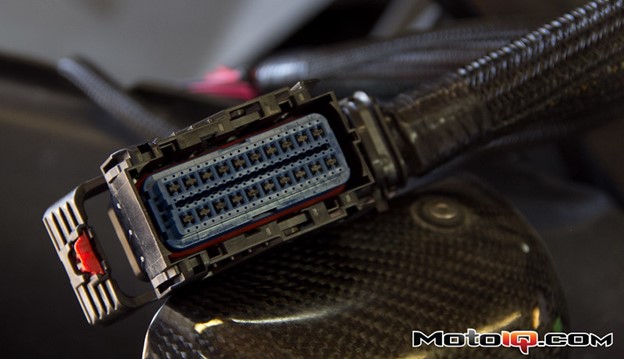 The main connector for the Infinity ECU is an OEM Molex flange mount connector. It is a positive locking design with a weather resistant silicone rubber gasket. This is a great connector and this series of connector has seen extensive use in OEM and Motorsports applications. This is quite a bit better than spade and bullet connectors with crimped terminations. 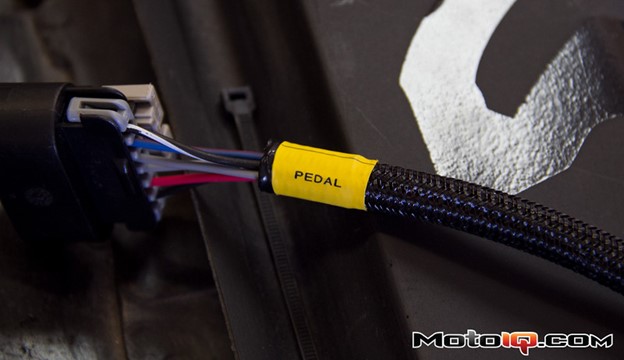 The AEM Infinity ECU and wire harness is fully drive by wire compatible. This is super important if you are swapping in a newer LS like an LS3 which are all drive by wire. The AEM harness plugs right into the GM pedal assembly without any messing around. 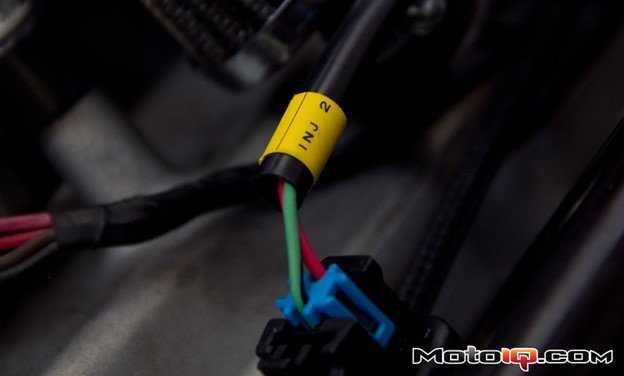 The injector branches of the harness are all terminated and wrapped in chafe resistant sleeving. All of the harness plugs are labeled which is a great touch, making things a lot easier for installation and trouble shooting if it ever becomes necessary. 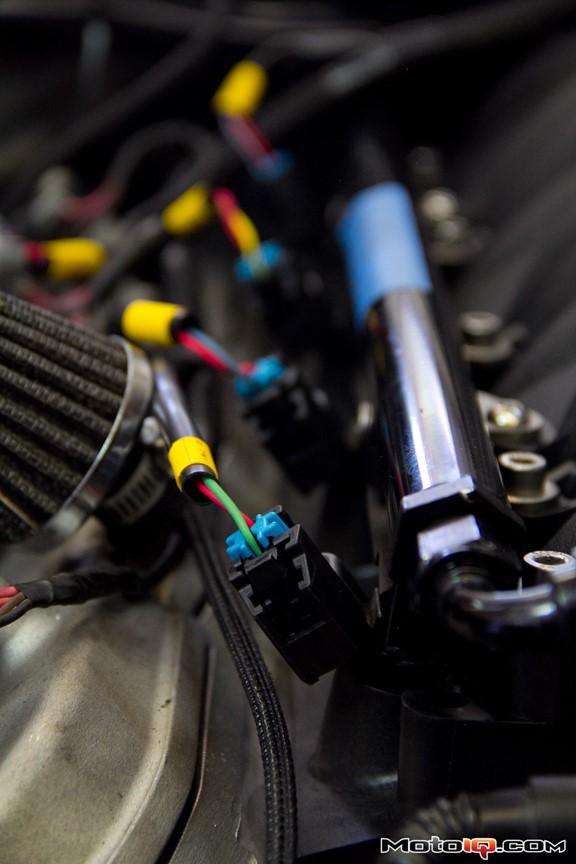 The harness connectors plug right in to the injectors, as they are OEM quality Bosch EV style injector connectors. 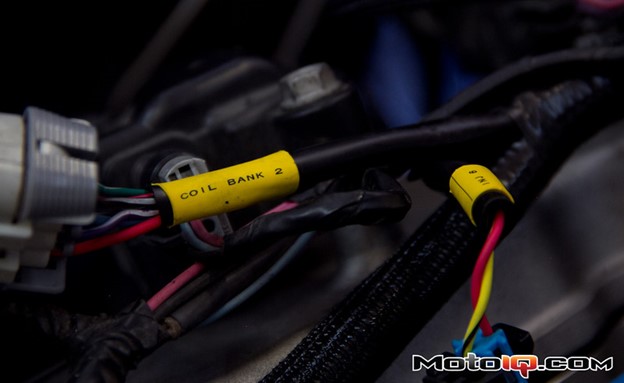 The direct fire coil connections are all there as well. Having everything clearly labeled is great! 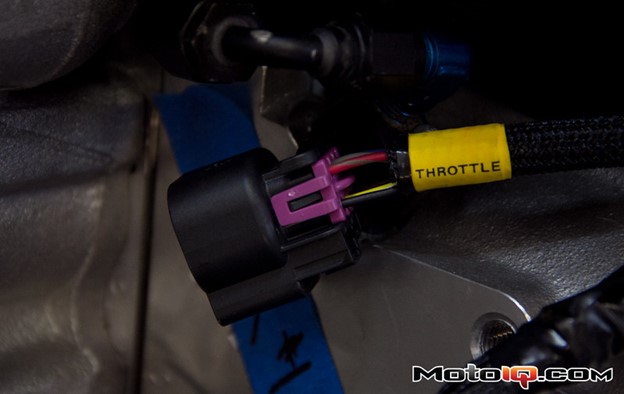 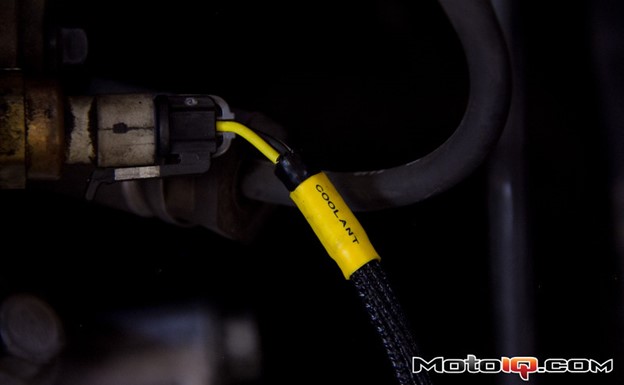 The coolant temperature sensor plugs right in.  This is pretty easy so far. 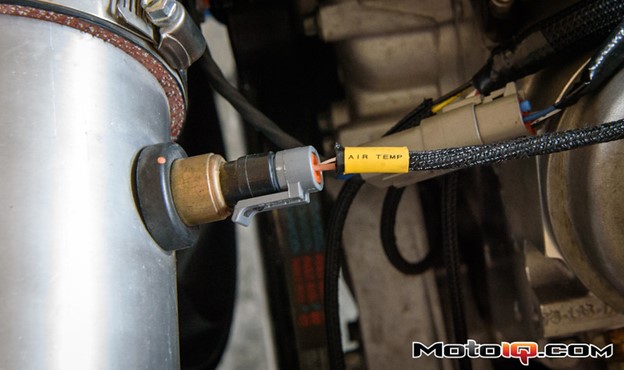 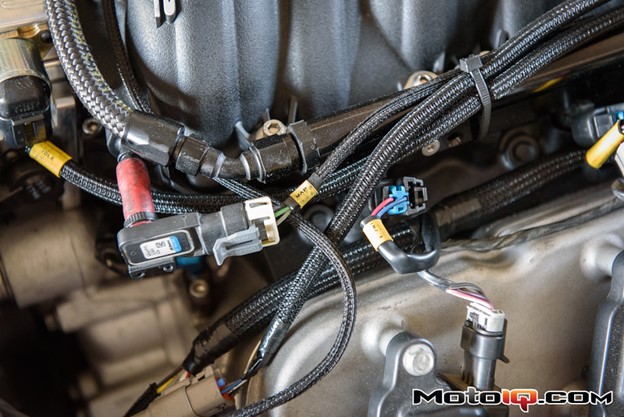 The factory MAP sensor was plugged in.  You can see the anti chafing harness cover over the injector and coil branches of the harness. 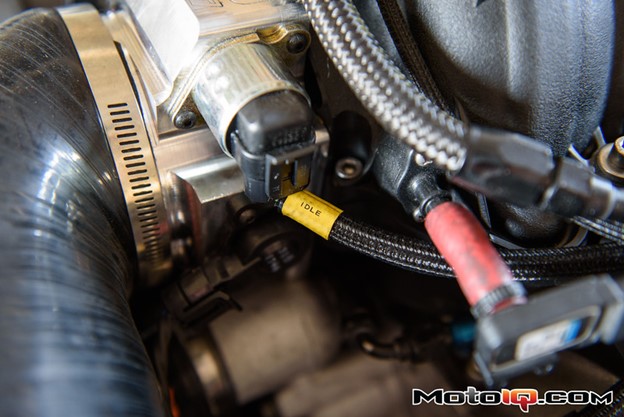 The AEM Infinity ECU fully supports the factory idle speed control and is direct plug in ready.  If desired flex fuel is an easy to install option with plug and play sensors. 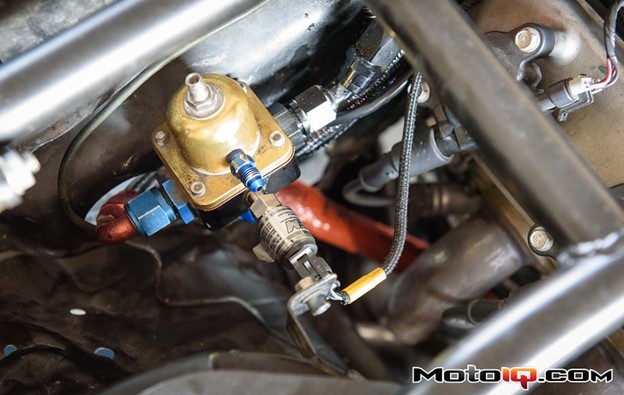 Matt added some auxiliary sensors for oil pressure and fuel pressure as well. 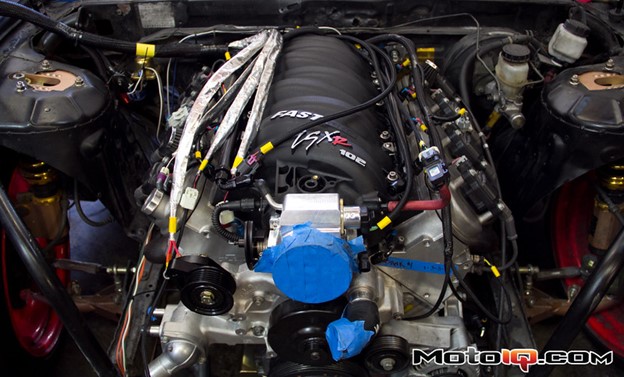 A drift car, particularly a drift demo car, is a brutal environment for any component. The AEM plug and play harness comes with thermal sleeves to protect the harness from excessive heat soak. The thermal protection is strategically placed where the harness may come close to hot surfaces. 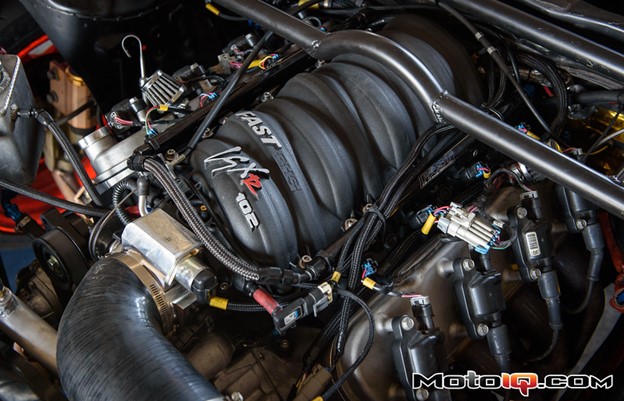 The harness is almost as clean as a custom one.  Some parts have a little excessive length because AEM doesn’t have total control over the end user and where they might locate everything.  For most of us, you are way better off getting this harness than trying to DIY it!  The FAST intake manifold flows better and has a 102mm throttle body.  The Comp Cam has 231 and 239 degrees of duration @ 0.050″ lift with 0.617″ and 0.624″ lift on the intake and exhaust respectively. The cam has an EFI friendly lobe separation angle of 113 degrees.  Comp Cams also supplied the springs, retainers, pushrods and rocker trunnions. 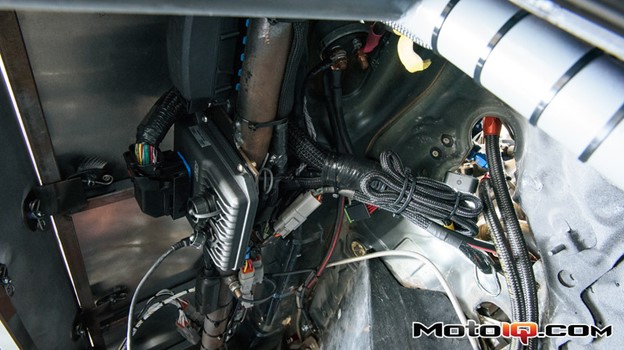 5523 Motorsports built this ECU bracket for the AEM Infinity to bolt to the roll cage crossbar under the dash. 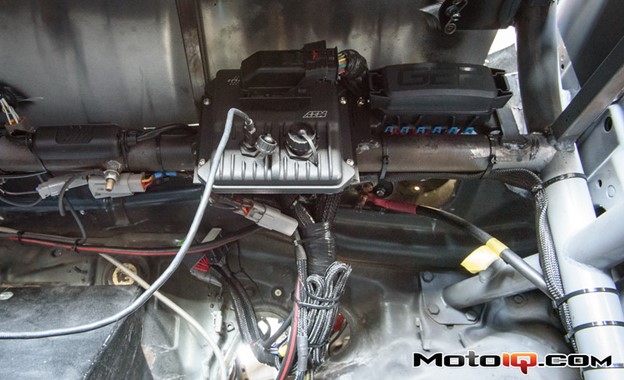 The controller for the second wideband O2 sensor is ziptied to the the cage next to the ECU. The Infinity 8H already comes with one onboard wideband controller along with a connector for a sensor, but Matt added a second one through an additional input so he could monitor and do feedback control on both cylinder banks. You can see that the harness is a little on the long side, but this gives the user a lot of flexibility in where the ECU can be mounted.  The excess harness is neatly rolled up out of the way. 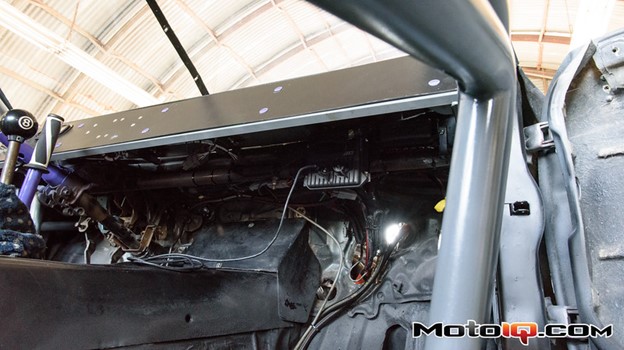 The ECU is accessible for tuning but very out of the way.  Yes a grommet was used for the harness pass through once the installation was complete. 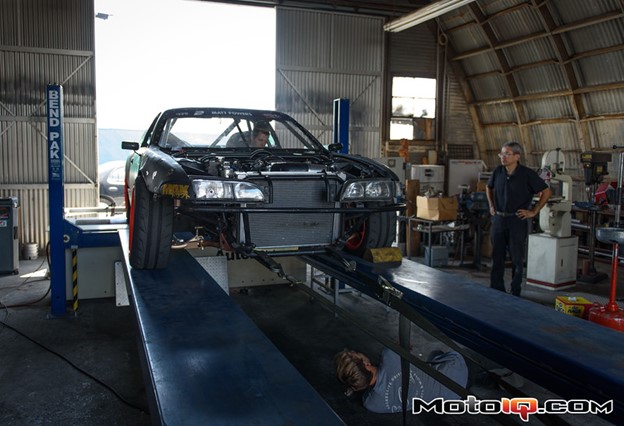 Matt’s car was strapped to the MotoIQ Megadyno and with the help of AEM’s Beau Brown, the tuning began. 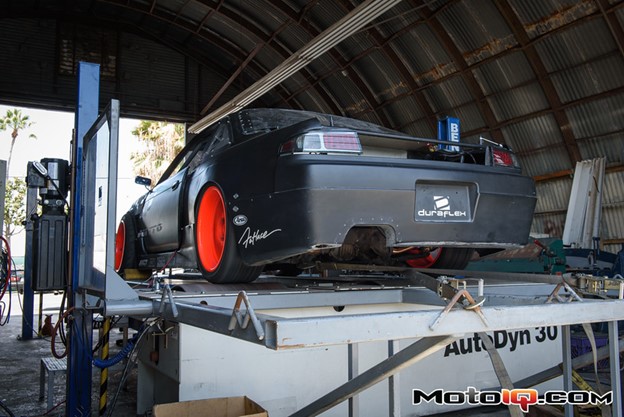 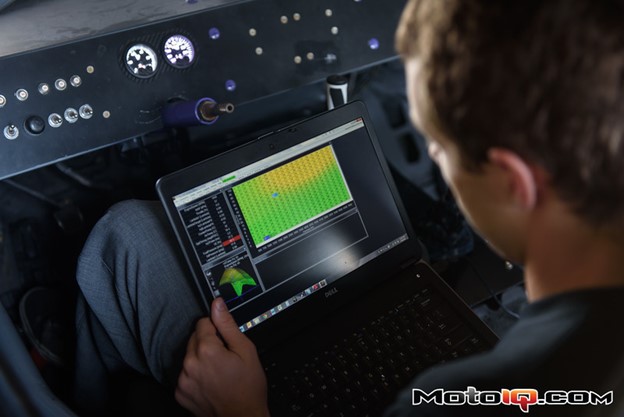 The AEM Infinity uses VE based flow calculations to derive the correct amount of fuel per air flow.  With a super high resolution map, the fuel tuning goes pretty quickly.  The car can be started with AEM’s base map with a very general VE value like 70% across the map. The cranking enrichment values and the warmup curves provided in AEM’s base map should be pretty close to allow for easy starting. Then the wideband feedback and looking at the autotune correction can be used to dial in the VE table to reach the target AFR. Basically you want to set the VE table for a lambda correction of about 0.02.  If the autotune has sensor issues it will fail slightly rich with this correction.  Beau makes tuning happen pretty fast. 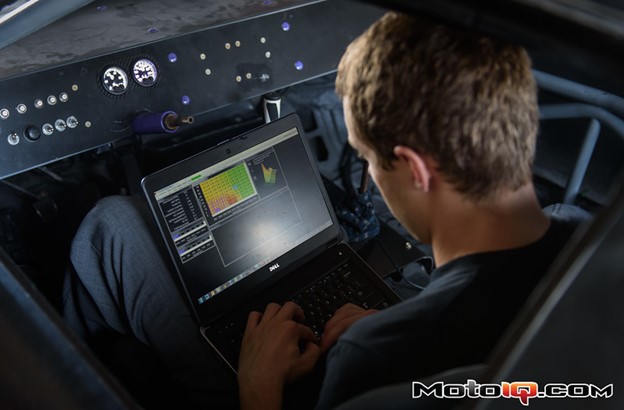 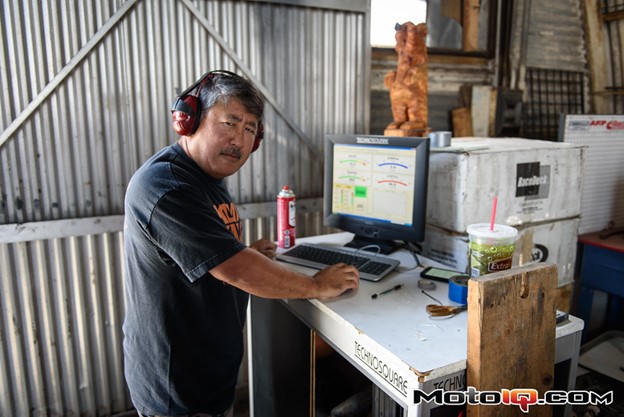 Matt’s motor made around 410 whp on our dyno.  Our Superlfow dyno reads notoriously low but this is about 60 more hp than what a bone stock LS3 reads on our dyno.  It’s the comparison that counts!  The most important thing to note here is how quick and easy it was to install and tune the AEM Infinity.

We are quite infatuated with AEM’s plug and play solution for the LS engine. The wiring harness makes the most difficult to do well part of any swap a literal snap.  In Motorsports wiring and plumbing failures account for nearly all of DNF’s so the AEM harness is relatively inexpensive insurance that you will spend more time on the track rather than in the pits.  We can’t wait to try this combo on other projects we have in mind in the near future!

Modified oil #5 galley and oil pump for a small bl

Engine complete, and getting crated up, to go to i

Fancy timing pointer with custom spacer for the sm

When your AC hoses don’t fit, because you modifi